(Below is a letter sent to the Board of Regents, and submitted as part of a community survey)

In my and many people’s opinion, Don Williams’ consideration for President of QVCC is naked political cronyism, pure and simple. I attended the Community Stake Holder open forum Thursday15 May as part of the interview process for Don Williams.

I reviewed Don’s resume against the other candidates for the position, and in my opinion Don clearly does not qualify to be the president of anything, least of all a college (I have personally hired over 300 people in my career). What struck me after reviewing all three resumes, Don is the only politician. Does anyone else find that odd? Each of the other candidates brings exceptional Educational credentials and experience. Don has none. The others are professionally qualified. Don is not.

Factually, and I hope all on the selection committee will honestly admit, if Don’s resume did not include being a politician in Hartford, he in no way would be considered for the job.

Factually, after the overabundance of words on his resume, the only substantive professional vocation Don Williams has held in the past twenty years is as a part time professional politician, and by any economic measure of effectiveness, a poor one at that.   He doesn’t hold a teaching license, has no professional teaching experience nor any Educational credentials, nil, zip, nada. (ask Don if he knows what Blooms taxonomy is, and can name the domains? I can).

Let’s be honest, Don’s sole professional experience dealing with Educational matters is spending taxpayer money. Not his own wealth, but rather other people’s money. Money he did nothing to earn. I’m betting handing out other people’s from the state treasury or borrowed is not in the job description for a College President, and is not considered a qualifying credential.

Factually, Don has no demonstrated skills or experience operating without political power. There is no political power vested with the president of QVCC.

Let’s consider the Community Stakeholder Open forum I attended Thursday at QVCC. Clearly the room was a love fest, filled with Don Williams supporters like a political rally.

Why? Because, with the exception of myself and a few others, most everyone in that room received or benefited from Don’s favors as a politician. He personally selected a few citizens to receive his favor to the detriment/punishment of other citizens. Understandably those that received favors are appreciative and present. He is there to collect on his favors, and those in the room are more than willing to pay him back. They owe him. On an emotional level, it really is not more complicated than that.

QVCC students, staff and the citizens of Connecticut deserve better than political paybacks for such an important position.

At the meeting, Linda C. asked the question of whether selecting Don would become political issue based on her observations from the WINY FB page. Of course Don and all the Don acolytes thought not or thought it ok. That is not true.

By definition, because QVCC is considering Don, a very polarizing politician, it is political, and will continue to be so over the next eight months until Don can be seated. Recognize, this is a choice QVCC made when they announced Don as a finalist.

What about conflict of interest? I can name one individual involved that very much owes a livelihood to Don. How many others involved in the process are uniquely beholden to Don?

Consider, Don’s becoming a finalist for this position is just over a week old in the public discourse. Wait until the news of this spreads, and I promise, the news will spread. There will be many letters to the Editor, inquiries to other State representatives, the Board of Regents, QVCC and FOIA requests. Many news blogs such as the Courant, CTMirror, CTNewsJunkie, et al just started posting about the blatant patronage and cronyism.

In my view, such blatant political patronage is easy to understand. Most, if not all citizens will see this for what it is when they become aware. I do not believe they will be pleased. I also, do not believe they will be silent; something all Don Supporters involved are hoping, with fingers crossed will happen. In my view, if Don is selected, all involved better buckle up for eight months of scrutiny, and honestly, self-inflicted scrutiny.

Think about it, a part time politician (albeit it a powerful one), whose managerial experience is slight and part time, is somehow qualified to run a college (Don touts his skill at managing 60 people, this is a Department Manager credential where I work, and not a big Department). How does that even pass the sniff test?

And I’m told this is not political. Move along, nothing to see here.

Who suggested a new trend was needed and what was the basis for that decision? Who determined that part time politicians held the Educational and Professional qualifications and experience to be a college president and then generated the job requisition?

I bet legitimate College Presidents cringe to see the politicization of a heretofore esteemed position.

Honestly, does anyone really believe Don has any clue on how to run a college in the 21st century?   I have sympathy for those members on the selection committee who know Don is not qualified, yet feel peer pressure to support him. I hope they find the courage to speak truth to power.

Think about it, through Don’s leadership, by every economic measure, Connecticut is ranked last or one of the worst states in the country. A recent poll says 49% of CT citizens would leave the state, second worst only to Illinois. Don Williams was the leader for such outcomes. Factually, by most measures, Don is not very competent at actually making things better for CT citizens.

Make no mistake, he is an expert at handing out taxpayer funds, and if you believe handing out other people’s money is the qualification of a college president, I stand corrected.

I ask that the Selection Committee and all involved recognize, and acknowledge Don has no Educational credentials to be a college president, and if hired, it will be solely based on his political credentials. 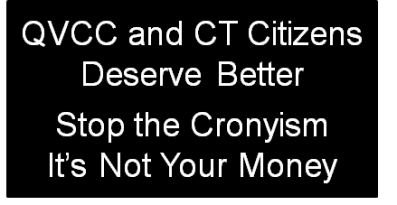