With over 3 million members, the Tea Party continued to influence our elections. Ted Cruz won the Tea Party straw poll and was the preferred candidate with 70% of the vote, however, once Donald Trump was decided as the candidate, the Tea Party swallowed hard, and got behind the GOP candidate because defeating Hillary and her band of regressive acolytes was most important. Our 2016 goals were to defeat Hillary, help the GOP retain the House and Senate, and ensure the next Supreme Court Justice would be a constitutional conservative in the mold of Justice Scalia. Tea Party members:

In addition to the presidential election, the Tea Party backed 25 winning House and Senate seats.

Locally, the CT GOP picked up 3 more seats in the state Senate and now have an historical tie at 18 to 18. In the state House, the GOP picked up net 8 seats, and the House is now split 79-72. Imagine, in 2008, and prior to the Tea Party, the CT Democrat party had a 77 seat advantage over the GOP in the State House, today that margin is just 7 seats.

Locally, Anne Dauphinais, a Tea Party conservative, defeated an incumbent progressive liberal and was elected as our State Representative from District 44 (towns of Killingly and Plainfield).

We are making a difference.  See complete report here:  victoryreport 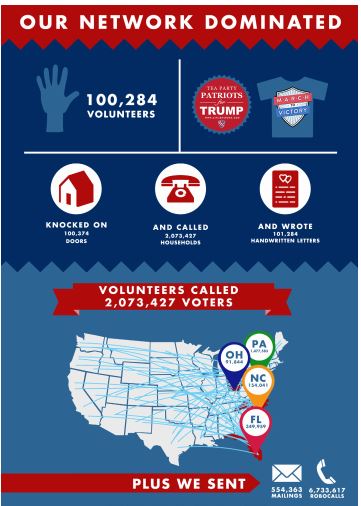