Budgetary Chaos in our State Capital and the Power of Five

Our Democrat controlled General Assembly (GA) has failed to pass a state biennium budget as we face a $5 billion deficit.  Their primary job is to pass a budget.

Town budgets are in turmoil.  Educational funding is in turmoil.  Over 4,000 state jobs at risk.  Citizens and businesses are fleeing the state along with their tax revenue.  We are currently ranked the worst state in the nation for fiscal health, our credit rating continues its downgrade, and our government cannot pass a budget.  For all to see, budgetary and fiscal chaos is now normal in Hartford.  Our economic demise apparent.

What a stunning lack of leadership from our General Assembly going back decades.

What we know about our budget.

If nothing is done, on 1 July Governor Malloy will be making the decisions, he’ll make the operational cuts he sees fit per his state constitutional and statutory authority.  Many Democrat legislators are afraid he will cut their sacred cows, exercise power they do not like.  They are not keen on the Governor controlling “their” money even if he is a Democrat.

What are the alternatives for the Democrat leadership?

One, they can do nothing, and allow Governor Malloy to take control 1 July.  Two, they can propose, and the GA could pass a Continuing Resolution(s) to prevent Governor Malloy acting independently until a budget bill is approved.  Three, the Democrats could propose a budget bill for a GA vote.  The General Assembly is next in session Thursday, 29 June to decide.

We are seeing an interesting dynamic in Connecticut State governance, something we’ve not seen for a long time.  The Democrat leadership in the GA cannot rule at will.

Consider, the Democrats have basically owned the General Assembly with significant majorities for well over three decades. They could do whatever they wanted, unfettered to satisfy their political ambitions, and they did.  They had votes to give away.  That’s not the case today.

Today, Connecticut’s Senate is tied, 18-18, with Nancy Wyman the tie breaker, and her tie-breaking vote needed 20 times this year.  In the Connecticut House, the Democrats have a narrow 79-72 advantage over the GOP.  This means if the Democrat caucus loses one state Senator, or four Representative votes, they will not be able to pass a budget bill.  This is the power of five.

One State Senator, four State Representatives will decide what the final budget bill looks like.  You can bet there are legal bribes occurring, seven to ten sore arms.

The Democrat leadership dilemma:  They must craft a budget that will secure all 18 Senate Democrat votes, zero caucus defectors allowed.  This same budget must achieve House approval, and ensure there are not four Democrats who defy their caucus (they have only three votes to give away).

Whatever bill they put forward, Governor Malloy can veto or pass.

I predict the Democrat’s propose new and increased taxes and fees, increased spending, more borrowing, and more faux promises of union and state operational savings.  I predict they will push more debt to our children and theirs. 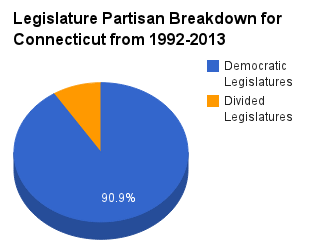