Below are some of my observations after this weekend’s Republican Party convention, and specifically the Governor’s race as it unfolded over the almost six hours needed to create a Party nominee with a 50% +1 majority on Saturday.  The sausage making.  This was my third convention as a delegate, and by far the craziest and most contested with eight candidates for Governor, and four for Lieutenant Governor.

Note:  Anyone that achieves 15% of votes on a ballot automatically qualifies for the August primary.

After the first ballot, Boughton, Herbst and Lumaj were leading.  Lumaj, fell just 3 votes shy of qualifying to be on the August primary ballot.  Because they did not achieve 8% of the vote, Handler and Srivansan were eliminated from the next ballot, and no switching of votes were allowed per the rules.

Ballot two, after switches, Boughton and Herbst pulled away, and the surprising Steve Obsitnik came in third with 17.6% of the vote, and each advanced to the 3rd ballot.  Peter Lumaj came in fourth (14.3%), 9 votes shy of achieving the 15%, and was eliminated as well as was Mark Lauretti (2.3%) and Dave Walker (1.2%).

Surprises for me:  Walker did so poorly, and Steve Obsitnik did so well. I also expected Peter would qualify to be on the August ballot.

With a 50%+1 needed for the nomination, after ballot three with no switches, Boughton held a 42.4% to a 37.8% advantage over Herbst with Obsitnik at 19.8%.  This is where it gets interesting; during the third ballot switch process.

Conservative and traditional Republican delegates did not want the liberal, and anti 2A Boughton winning the top line on the ticket.  This meant during the final switch if you wanted to put Herbst on the top line vice Boughton, Obsitnik voters would need to switch their vote to Herbst (Obsitnik at this point is already qualified for the August primary ballot).

As it turned out, during the switch, Obsitnik voters gave Boughton the Party nomination when 86 switched to Boughton, and only 34 switched to Herbst.  Boughton at the top of the ticket is in the best interest of Obsitnik if you portray yourself as a conservative outsider.

At the end of three ballots, Danbury Mayor Mark Boughton with large Fairfield County support fairly won the Party nomination.  When Chairman JR Romano called for acceptance of the nomination through an Aye or Nay vote, all hell broke loose.

When he asked all in favor say Aye, a loud group of delegates loudly yelled Aye.  He asked:  those opposed say Nay, the Nay crowd was equal in volume or louder in opposition.  A bit of confusion ensued, and then the Chair implored again banging the oversized gavel:  those in favor say Aye, and this time, the Ayes were way louder; those opposed, say Nay, and the Nays, were even way louder again.  With no voice vote achieved from the 1,100 delegates.  Yelling and screaming between the tribes ensued.

They then realized that a hundred or so guests were voice voting with the delegates, so they cleared the room so that only delegates would be heard.  Not surprisingly, same outcome.

We are then told to prepare to divide the house which few knew what the hell that even meant.  Turns out, it means Aye’s all move to one side of the room, and Nay’s to the other and they count heads.  Good thing cooler heads prevailed on this idea.

Someone made a point of order that some towns did not vote due to lack of agenda and communications confusion.  Apparently rejected.  Dennis Cleary makes a point of order, which no one can hear because of the yelling.  After a bit more confusion, and some oversized and displeased gaveling, we are next told to stand if Aye, and sit of Nay and they will take a count (much better than 1,100 people moving).  They had runners take a count, the nomination was declared accepted, and Mark Boughton was declared the winner.

The cheers and jeers at the announcement were equally load and boisterous.  It was a clearly divided room.  A crazy 45 minute switch period and vote.

At the Convention, the divide between the cities and rural towns was evident; between east of the river versus west evident, and between Boughton fans and the Herbst fans evident.

In my opinion, the chaos at the end of the third ballot vote was created by the Chair asking for acceptance.  Acceptance was and is when the final vote tally was taken and a candidate achieved 50%+1 (Dennis Cleary’s point of order).  Boughton won in accordance with the rules, and should have been declared the party nominee at the end of the voting.  Acceptance occurred with the vote, acceptance with a voice vote is nonsensical.

So, out of the Convention, there are three candidates who achieved August primary ballot access.

Boughton, Herbst, and Obsitnik are on the ballot.  All qualify for $1.25M of Connecticut taxpayer funds to campaign to the primary in August (win the nomination; you receive $6M for 3 months).  Additionally, there are two credible self funders who skipped the Convention (Stefansowski and Stenerman).

At the convention, there were 1,133 delegates who voted for the GOP party nominee for Governor.  In August, there will be about 80,000 Republican primary voters who actually decide who the GOP candidate to run against Ned Lamont or whomever the Democrats nominate in August.

For the self funders, both correctly calculated they would not achieve 15% from the Republican establishment and pledged delegates, and they are expected to petition their way on the ballot.  Because they are not part of the Citizens Election Program (CEP) program, they are able to spend as much money as they want.  Stenerman put down a $1.2 million commitment.  That is a total of five on the August ballot, and it is possible one or more of the losers this weekend might also petition their way on the ballot.

The best thing that happened at the Convention for conservatives is that @Joe Markley won the nomination for Lieutenant Governor on the first ballot against two liberal Republicans (Erin Stewart and Jayme Stevenson).  He is likely to face a primary from both, but 54% of the delegates supporting him on the first ballot is great. 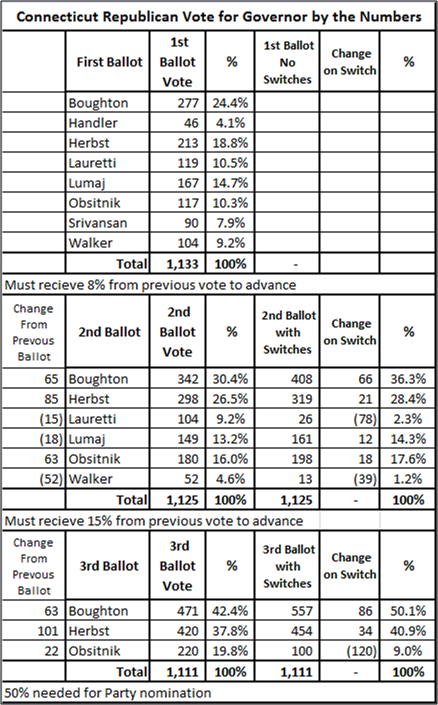